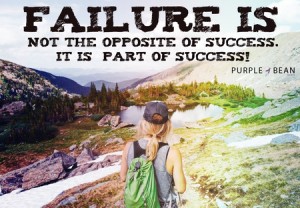 “Failure is not the opposite of success. It is part of success!” -Unknown

I love this quote so much; it has the potential to change lives. What if we looked at failure not as something to avoid at all costs, but a necessary step on the road to success?

When my kids were learning to walk, I wasn’t disappointed when they took a few steps and then fell down. I cheered for them, I picked them back up, I told them they could do it! Then they took a few more steps, and fell down again! Once again, I cheered them on. I didn’t call them failures when it happened. I didn’t roll my eyes and tell them to not bother learning to walk, because they obviously won’t get it. I didn’t encourage them to quit. I cheered like crazy when they got up and tried to take a few more steps. I was their biggest cheerleader and encourager!

When did this outlook change? When did we start telling everyone to just give up. When did we come so ashamed of failing?

Oprah Winfrey was demoted from her job as a news anchor because she “wasn’t fit for television”. Walk Disney was fired from a newspaper for “lacking imagination and having no original ideas”. Michael Jordan was cut from his high school basketball team!

Thank God all of these people didn’t just give up when someone told them they were failures. They rose above it and went on to become recognized in their respective fields and leaders of a generation.

So when you or someone around you fails, don’t let them quit. Be their cheerleader, be their encourager. Remind that them failure is not the opposite of success; it’s part of it!